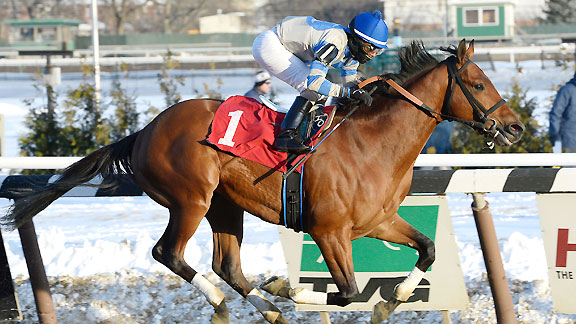 The odds-on favorite Noble Moon did not disappoint in the Grade 2 $200,000 Jerome Stakes at Aqueduct on Saturday, winning by two lengths. Ridden by Irad Ortiz, Jr. for trainer Leah Gyarmati, Noble Moon took the lead after four furlongs and did not look back. This was the first career stakes win for the son of Malibu Moon, who has now earned $193,000 through three starts.

Noble Moon is owned by Treadway Racing Stable, but was bred in Virginia by the Estate of Edward P. “Ned” Evans who passed away at the end of 2010.Lane’s End Farm in Versailles, KY handled the dispersal of Mr. Evans’ Thoroughbreds, and sold Noble Moon as a yearling to Treadway at the 2012 KeenelandSeptember Yearling Sale in Lexington, KY.

Jeff Treadway, owner of Treadway Racing Stable, is originally from Lexington, KY, but now works in Brooklyn, NY. Treadway was a former oil and derivatives trader before getting into the Thoroughbred game according to Forbes. Treadway teamed up with (trainer) Gyramati for their first Graded Stakes score withSweet Reason in the 2013 Spinaway Stakes at Saratoga.

According to the BloodHorse, Gyarmati said Noble Moon will bypass the February 1 Withers Stakes at Aqueduct and will point for the March 1 Gotham Stakes at Aqueduct, which carries more points (50-20-10-5) toward the Road to #KYD14.

Noble Moon is now tied with four other horses in fifth place on the #KYD14 Leaderboard. Here’s a look at all the points earners from Saturday’s contest:

The next race in the series takes us out to Santa Anita Park in Arcadia, CA for the Grade 3 Sham