With so much coverage of the Breeders’ Cup (9.5 hours total), I thought I would take the time to introduce you to the NBC Sports broadcast team who will be bringing you the 30th edition of the World Championships. Coverage begins Friday, November 1 from 4-8pm EDT and Saturday, November 2 3:30-8pm on NBC Sports Network. From 8-9pm on Saturday, the Breeders’ Cup Classic coverage will be broadcast on NBC. Here’s a look at the broadcast team:

Bush is the primary host of the syndicated entertainment-news show Access Hollywood. Bush will serve as the host of the first half hour of NBC’s coverage of the Breeders’ Cup Classic, which will feature a focus on the spectacle and scene surrounding the event. Bush was born in Manhattan and is the nephew of President George H. W. Bush and cousin to President George W. Bush.

Sadler is currently the co-anchor for E! News Weekend. Named by the LA Times as a Top 10 Up-and-Coming broadcasters in entertainment, she will be conducting celebrity interviews on the main NBC Network in addition to giving reports from the Breeders’ Cup “Purple Carpet.” An Indiana native, Sadler first appeared in the movie Hoosiers at age 11.

Hammond, a native of Lexington, KY, is one of NBC’s staple on-air presenters along with Bob Costas and Dan Hicks. He has served as the play-by-play commentator for NBC’s coverage of Notre Dame Football and the Track and Field portion of the Summer Olympics. His tenure at NBC began in 1984 when he was named a co-host of the inaugural Breeders’ Cup alongside Dick Enberg.

The Hall of Fame jockey won over 5,800 races including 2 Kentucky Derbies, 2 Preakness Stakes, 2 Belmont Stakes, and 15 Breeders’ Cup races, including 5 wins in the Breeders’ Cup Classic. His mounts had earned over $295 Million when he retired in 2006 and has worked as a racing commentator for ESPN and NBC.

Moss, a native of Hot Springs, AR, grew up around Oaklawn Park. He began working for ESPN in 1999. He joined the NFL Network in 2008 and has been covering horse racing for NBC Sports since 2011. Moss’ still also serves as a remote reporter for NFL Network, and has also covered the Summer Olympics and has done play-by-play for NBC Sports’ coverage of Ivy League Football.

The son of of Hall of Fame Jockey Laffit Pincay Jr., Pincay is one of the original members of HRTV on-air talent stables. He began covering the Kentucky Derby among other races for NBC Sports in 2007. He also hosts Pursuit of the Crown and Pursuit of the Cup on HRTV.

Battaglia has been a member of the NBC Sports broadcast team for the Kentucky Derby and Preakness Stakes since the network gained the rights in 2001. He has served as the oddsmaker for Churchill Downs since 1974 and also works for Turfway Park and Keeneland. Battaglia also appeared in the 2010 movie Secretariat.

Neumeier has covered various sports, beginning with hockey in the 1970’s. He has also covered Olympics for NBC, the Tour de France, but is most well-known for his coverage of horse racing. A native of the Boston area, Neumeier won the 1990 World Cup of Thoroughbred Handicapping at Caesar’s Palace in Las Vegas.

Collmus serves as the track announcer for Monmouth Park in Oceanport, NJ and for Gulfstream Park in Hallandale, FL. A native of Baltimore, Collmus started in 2011 as the official announcer for NBC Sports’ horse racing coverage, including the Kentucky Derby, Preakness Stakes, Belmont Stakes and Breeders’ Cup races.

A former Jockey who won over 1,100 races, Brothers started working for NBC in 2000 at the Breeders’ Cup as their reporter on horseback. She also has worked for TVG and authored the book “Inside Track: Inside Guide to Horse Racing.”

Kenny Rice is a native of Kentucky and joined NBC Sports in 2009. He also is known for his MMA coverage on HDNet. Rice has also covered the Summer Olympics, Boxing, called college basketball, and has reported for NBC’s Football Night in America.

Privman covers racing primarily in Southern California for the Daily Racing Form. He also has been part of NBC Sports’ broadcast team for their major horse racing broadcast throughout the year, and naturally will be a reporter at the Breeders’ Cup. Privman is also the author of “Breeders’ Cup: Thoroughbred Racing’s Championship Day.” 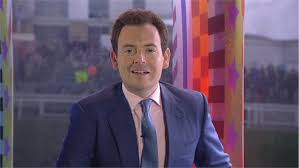 Nick Luck is a British racing reporter who will make his debut for NBC Sports for their broadcast of the 30th Breeders’ Cup World Championships. He is the host of Racing UK and Channel 4 Racing across the pond, and got into horse racing at a young age, spending one year working with horses in Kentucky before getting his degree in French and Masters in French Literature.