We are only nine days away from the Breeders’ Cup World Championships at Santa Anita Park on November 1-2! Team ABRV will arrive on Tuesday, October 29 to start promoting and take in the sights and sounds surrounding one of the richest weekends in sports. Here are a few headlines that have been released in the last couple of days…

The Breeders’ Cup provides a list of past performances for all pre-entered contenders in the 2013 World Championships, as well as a schedule for each race and the network on which they will air. NBC has chosen to show the Breeders’ Cup Classic as part of an hour-long broadcast from 8-9pm EDT on Saturday, November 2. The approximate post time for the Classic is 5:35pm EDT. Let’s face it; we can’t be disappointed that our sport’s major event gets a full hour in prime-time on a major network like NBC, especially when there’s College Football going on (Although it would’ve been nice to see Wise Dan run on the main network!). Aside from the Classic, all other races will be broadcast on NBC Sports Network.

BREEDERS’ CUP ANNOUNCES LINEUP FOR ‘SONGS IN THE SADDLE’ FESTIVAL:

As you can see, recording artists Macy Gray, Babyface, Toni Braxton and Kristin Chenoweth will be showcased in the infield, along with food trucks and a beer garden. The concert is tentatively scheduled for 2:30-6:15 PDT. Props to the Breeders’ Cup for putting together some big-names for an epic event…

There was a lot of buzz surrounding Kristin Chenoweth‘s appearance on the Tonight Show with Jay Leno last night, and although I was sound asleep by the time it came on, I was able to find this highlight from last night’s episode:

Chenowith took down a bite of haggis and blood pudding in exchange for a breast cancer charity donation from Leno. That’s dedication… and luckily she didn’t puke on-air. Let’s take a look at some classics from the rest of the infield acts:

Babyface – Everytime I Close My Eyes

For Friday Infield General Admission it will cost $10 in advance, $15 at the gate, and for Saturday, when I’m guessing these big acts are scheduled to perform, cost will be $25 in advance, and $40 at the gate.

I think my man Jose Contreras said it best on Twitter earlier:

It really is a horseplayer’s dream to hit it big at the Breeders’ Cup – but it’s not easy. All of the ambassadors will be posting our picks on our America’s Best Racing website once we get closer, so I have some work to do.

Speaking of horseplayer dreams, the Breeders’ Cup and NBC Sports came up with a crazy concept called Million Dollar Finish, where contestants sign up to pick the correct order of the top-10 finishers in the Breeders’ Cup Classic, for a chance to win $1,000,000. So there are 14 horses in the race – let’s do some quick math – 14x13x12x11x10x9x8x7x6x5 = over 3.6 Billion… but hey, this guy’s still going to take a crack at it! I don’t even know if I’m eligible to win, but who cares? It’s still fun! 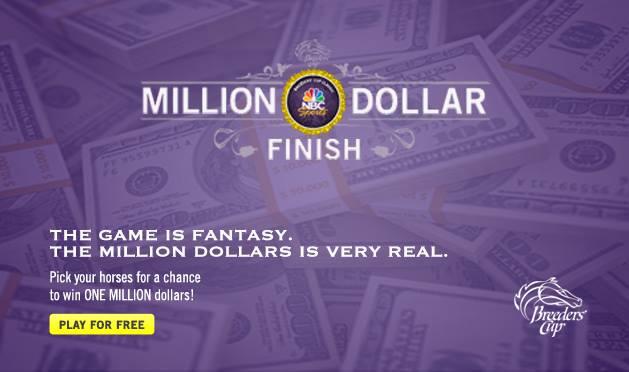