I originally posted this in April, but I wanted to revisit it with Keeneland’s Fall meet on the horizon. Whether Spring or Fall, the start of a Keeneland meet is a time of year where I really get excited about horse racing and want to share that excitement with all my friends, family, and whoever else might want to join in.

Some people go to Keeneland just to drink, eat, people watch, and be seen. Some people go for all those reasons, and will make a casual bet here or there. Some people would like to know more of what is going on in terms of the grand  scheme of horse racing…like, “what makes a race important?” “What’s the difference between an allowance race and a maiden special weight?” “What does ‘optional claiming’ mean?”

I’m here to help you at least look and sound like you know what you’re talking about. When you have more of an understanding of how it all works, it’s definitely more fun. So, here’s my attempt to empower you.

When looking at a race program, I want you to remember an acronym that will help you remember what you’re looking for: A.S.S.D. – which stands for “Age, Sex, Surface, Distance.” Now I’m going to break those things down for you…

Three common restrictions in racing with regards to age:

Two-year-olds, or juveniles as they are often referred to, are the youngest of the racehorses. The earliest you’ll see a two-year-old run in a given year is probably around April. The two-year-old scene really ramps up in the second half of the year, starting in July with Saratoga and Del Mar, and culminating with the Breeders’ Cup.

Three-year-olds are the most promoted of the age groups, especially in the first half of the year, because the Kentucky Derby, Preakness and Belmont Stakes are all restricted races only for three-year-olds. There is an entire points system in play that dictates what races will qualify a three-year-old for the Kentucky Derby, and those races are the most exciting in January and February to some regard, but especially in March and April.

“For Three-year-olds and up” – Only restricted to two-year-old horses, because they really are not able to compete with older horses that early in their racing career.

Beyond the Triple Crown races, there are still several races held for strictly three-year-olds throughout the entirety of the year. However, if your horse competes at the highest level, you might send him or her to 1-2 more three-year-old restricted races after the Triple Crown before moving them up against the big boys or girls.

Remember the three terms we used in the “age” section:

If the race uses one of the following terms, then the race is limited to only females, wherein males cannot compete: 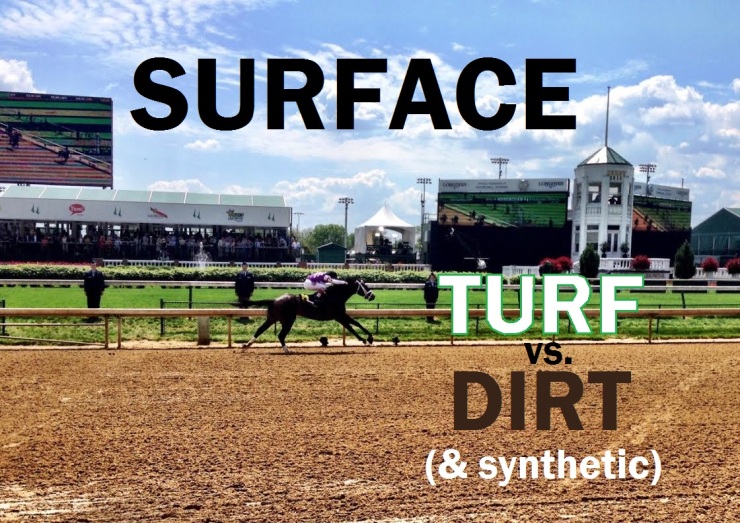 There are three major surfaces in North America:

In many ways, dirt is the signature surface in America. Our biggest races are held on dirt: all three Triple Crown races and 7/ 13 Breeders’ Cup races. The majority of American racetracks with a dirt track also have a turf course. There are a few that only have dirt, and even a few who are strictly turf.

While our biggest races are held on dirt, there are still plenty of significant races held on the grass. If you have a horse that just turned two and you’re trying to decide which surface he should run his first race on, you’ll probably look at his pedigree, and try and identify which surface his Mom (Dam) and Dad (Sire) had the most success. Another reason trainers will try horses on the turf is if they have bigger, wider feet than normal. For whatever reason, horses with bigger feet generally are sent to the turf before horses with smaller, average-sized feet. 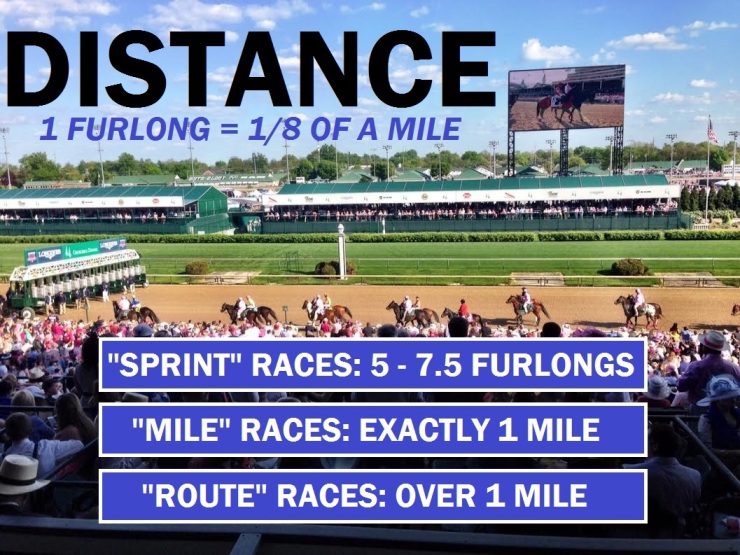 In U.S. horse racing, the distances are measured in “furlongs.” One furlong is equivalent to 1/8 of a mile. Races traditionally range from five furlongs to 1 ½ miles (12 furlongs). The “classic distance” in terms of American racing usually refers to a race of 1 ¼ miles (10 furlongs).

In the Breeders’ Cup, all of these terms are used – and often combined – to determine which division of horse(s) compete in a given race.