Nine rivals will line up Saturday at Pimlico in attempts to spoil the Triple Crown bid of Kentucky Derby presented by Yum! Brands-winner Always Dreaming in the 142nd renewal of the Preakness Stakes.

Here's your @PreaknessStakes field, post positions and morning line odds! Who do YOU like? #Preakness #TripleCrown17 pic.twitter.com/c0LBEQgolT

The 4-5 Preakness favorite arrived in Baltimore on May 8, just two days after his Derby triumph, and seems to have been training well over the Pimlico oval.

Thought Always Dreaming sharper today than yesterday, and he was very good yesterday. Seems like dynamite ready to explode when lit. #ready

Four other Derby-runners will return off just two weeks rest to contest for the Triple Crown’s second jewel: Lookin at Lee (2nd in the Derby), Classic Empire (4th), Gunnevera (7th) and Hence (11th). Among those four, Classic Empire at 3-1 looks to have the best shot to take down Always Dreaming. Here’s what his trainer Mark Casse told Churchill Downs Communications after Classic Empire’s rough trip in the Derby:

“I watched the replay a couple of times yesterday,” Casse said. “Initially I had blamed McCraken. And it probably was more Irish War Cry than McCraken. McCraken is who got us. Honestly, I think our horse probably got more respect out of that performance (from) anyone who really watched the race, because he overcame a lot just to finish fourth. I’m proud of him, and look forward to trying Always Dreaming again.

“Classic Empire is very fast. Our intentions were to be up laying close to the pace. In fact, I told Julien (Leparoux) that I’d love to be able to get up and get over. Because I thought there was definitely an advantage to being inside. And 100 yards out of the gate, it was pretty well over, I thought. Now I do have to tell you that we did get a little bit excited about the half-mile pole, because he did start with a run. But the first part of the race was like, ‘Oh boy.’

The Triple Crown newcomers are Illinois Derby (G3)-winner Multiplier; Cloud Computing, who finished third in the Grade-2 Wood Memorial last out; Term of Art, who most recently ran seventh in the Santa Anita Derby (G1); Grade-3 Lexington Stakes-victor Senior Investment; and Conquest Mo Money, who finished runner-up to Classic Empire in the Arkansas Derby (G1) in his last effort. Here’s a look at the full field:

A Look at Recent Preakness Trends

I was curious as to how recent Preakness fields have taken shape with regard to the ratio of Derby runners and non-Derby runners. Here’s a look at what I compiled: 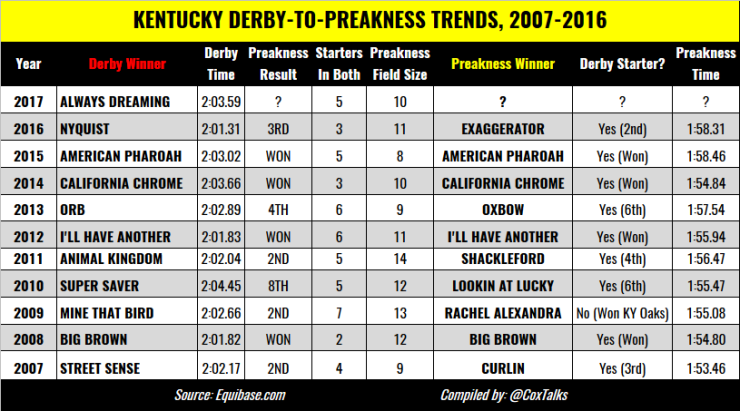 Five Derby-to-Preakness runners is just above average (4.6) for the last 10 years, while the average field size has been nearly 11 over the past decade.

Recent history indicates that a Preakness winner is much more likely to have come from the Derby than anywhere else.

Kentucky Oaks-winner Rachel Alexandra is the only non-Derby starter to win the Preakness since 2007, defeating 2009 Kentucky Derby-winner Mine That Bird by a length.

If you go back an additional 15 years, only two other horses have won the Preakness that didn’t participate in the Derby. 2006 Preakness-winner Bernardini ran the week before the Derby in the Withers Stakes at Aqueduct. That was the same Preakness when Derby-winner Barbaro tragically broke down. Red Bullet, who ran second in the 2000 Wood Memorial but skipped the Derby, galloped away in the Preakness that year 3-3/4 lengths ahead of Derby-winner Fusaichi Pegasus, who held on for second.

Past Race History of 2017 Preakness Jockeys and Trainers 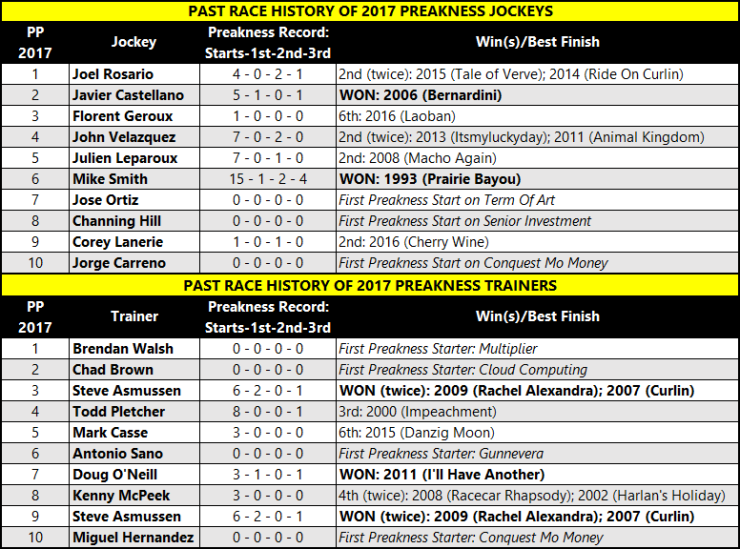 Only two jockeys in the 2017 Preakness have ever won the race before: Javier Castellano and Mike Smith. Joel Rosario, John Velazquez, and Corey Lanerie have all been close, recording five runner-up finishes between the three of them. Three jockeys are making their debut in the Triple Crown’s second jewel: Jose Ortiz, Channing Hill, and Jorge Carreno.

As for the trainers, Steve Asmussen has captured the race twice, while Doug O’Neill has one previous Preakness win. Todd Pletcher is the only other trainer to have previously hit the board. First-time trainers are Brendan Walsh, Chad Brown, Antonio Sano, and Miguel Hernandez.

How does the race setup?

Conquest Mo Money has shown the most early speed of anyone in the field not named Always Dreaming. Conquest Mo Money will break from the far outside in post 10, similar to his post in the Arkansas Derby, when he broke from 11th in a 12-horse field. I think the connections of Always Dreaming would love to see Conquest Mo Money come over from the outside and grab the early lead, allowing the Derby winner to sit behind in stalking position in a close-second.

But I would think Classic Empire’s connections wouldn’t mind a similar, stalking trip, and may even try to challenge Always Dreaming early for that early second-place position. If I’m Todd Pletcher, I’m telling jockey John Velazquez to get out in front of the three to your inside and get to the rail, and hope that Conquest Mo Money comes from the outside and maybe squeezes Classic Empire in between horses to keep him away from the front early on.

Cloud Computing is another horse I expect to be closer to the pace early on maybe in third or fourth through the opening quarter and half-mile. This is a lightly raced colt making just his fourth career start, so you have to think he’s got room to improve. Trainer Chad Brown could have entered him in the Derby, but he obviously thought the Preakness would be a better spot for this inexperienced young colt.

Gunnevera I expect to have a better showing and will close late, but I think he’s still only fourth or fifth best in this field. To me, Lookin at Lee is the closer that deserves a closer look. He ran third behind Classic Empire and Conquest Mo Money in the Arkansas Derby before finishing second in the Kentucky Derby. I think he should benefit from a 10-horse field, the smallest he’s faced since last September. Lookin at Lee’s sire, Lookin at Lucky won the Preakness in 2010, ending the Triple Crown hopes of Todd Pletcher’s last Derby-winner, Super Saver.

So I expect Conquest Mo Money to lead early and then give way to Always Dreaming and Classic Empire at the top of the stretch, making for an exciting late duel from the two seemingly best horses in the race. I think Cloud Computing will be right behind them, but then Lookin at Lee and Gunnevera will likely pass Conquest Mo Money and Cloud Computing in the final furlong or so. I think there’s a scenario where Lookin at Lee could get up for second, or even win the race, but there would have to be some pretty fast early fractions with the two favorites close to the front the whole way in order for that to happen. 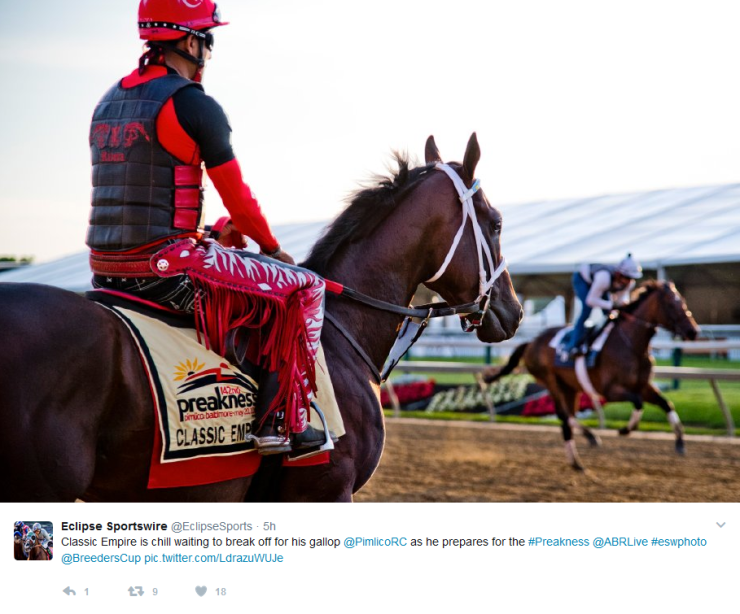 I have to think Classic Empire would have been right there with Always Dreaming in the Kentucky Derby if not for the bad start. It sounds like both horses have come out of the Derby well, but Todd Pletcher admittedly likes to give his horses more time than even three weeks, much less two, to prepare for their next race. In each of Always Dreaming’s four wins, he has handily taken the lead in the stretch, but really hasn’t had a horse come out to challenge him late like I think Classic Empire will Saturday. Classic Empire hasn’t had many wins where he’s had to pass horses in the final furlong either, but the way he powered by Conquest Mo Money in the Arkansas Derby was impressive.

With that said, I’m taking Classic Empire to win. He’s going to be a bit better of a price than Always Dreaming, although it probably won’t be as high as the 3-1 he was given on the morning line. I’d say more like 2-1 or 9-5. I think Always Dreaming probably holds for second, but don’t sleep on Lookin At Lee, who I think should hit the wire at least third with a much higher price. I may even bet against myself and put some side money across the board on Lookin at Lee depending on his price. I don’t think a $5 Trifecta Box using Classic Empire, Always Dreaming, and Lookin At Lee would be a terrible bet, especially if Lookin At Lee could get up for second. A $5 Tri Box (4, 5, 9) would cost $30 total.