To me, there is no greater month to live in Lexington, Ky. than October. With college football season in full swing and live racing at Keeneland, you’re guaranteed to find a rowdy tailgating atmosphere on any given weekend in the Bluegrass.

As many know, this October also marks the first time that Keeneland will play host to the Breeders’ Cup World Championships on Oct. 30-31. The city will be an absolute zoo that weekend, welcoming thousands of horse racing fans from around the globe to the Breeders’ Cup and also a few less-welcomed Tennessee fans to town when Kentucky plays host to the Vols at Commonwealth Stadium, also on Halloween.

Like all Keeneland October meetings, the historic track also will play host to significant stakes races that serve as qualifiers for the 2015 World Championships. Here is a look at the stakes schedule for the first four race days:

Note: The Woodford and First Lady on Saturday are not official Breeders’ Cup “Win and You’re In” races, but the winners are likely to go on to compete in the Breeders’ Cup Turf Sprint and Breeders’ Cup Filly and Mare Turf, respectively.

To answer the first question, I will refer readers to the Where to Start portion of my website that explains how to categorize each race. There are 13 total Breeders’ Cup races, each for a given division of horse. Here’s a look at the full schedule: 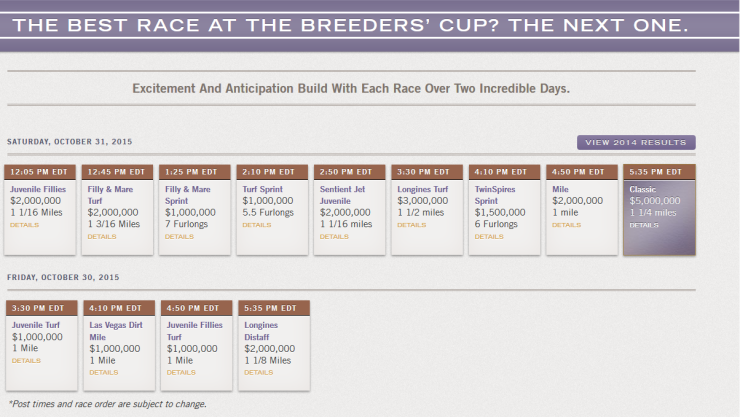 As you can see, each race awards the winning connections with a huge amount of prize money, marking the proverbial champion in each division. It’s a bigger deal to horse people than the Triple Crown, because horses who run in the Triple Crown really only make up about one half of the Classic division. Only 3-year-old horses are allowed to run in the Kentucky Derby, Preakness and Belmont Stakes, so the Breeders’ Cup Classic puts 3-year-olds head-to-head with older, more experienced horses. The Classic has been dominated mostly by males, so there’s also a complimentary race called the Distaff for females only. Here is a chart I created to make sense of how these races are divided:

Now that you have a feel for what the races actually mean, I’ll refer you to the Breeders’ Cup website if you’re interested in learning more about the prospective contenders for each race.

The main thing is to watch these “Win and You’re In” races closely, because you never know when you might see a horse that goes on to be a Breeders’ Cup winner.